What Is Malware? Definition and Removal Tips

Malware is a terrible force. Each year, unsuspecting victims lose millions of dollars and have their identities and private data stolen. Businesses lose data and revenue, and governments fall prey to corrupt hackers — these are some of the reasons why you must take precautions.

This article aims to help you better understand what malware is and how you can protect yourself, your family, and your business from its damaging effects.

Malware is a catch-all term that encompasses all forms of harmful software.

Often confused with  “virus”, in reality, the terms are not synonymous — a virus is only one form of malware. Malware comes in many forms — including spyware, worms, trojans, and ransomware — and may infect your device in several ways. Most often, infection occurs via malicious links or infected files downloaded from the Internet.

The damage this malicious software can do varies. From filling your screen with intrusive pop-up ads to encrypting essential files and demanding a ransom in return — the threats are endless. Although hackers often use malware to infect computers for financial benefit, malware can also be used to test security systems for weak points, spying. It can even be used for political gain.

There’s a good chance that the computers you’ve used in the past had a malware infection at some point. Traditionally, Windows has been the most common malware target, with macOS and Android trailing close behind. A rule of thumb: as a device increases in popularity, so too will the number of malware attacks.

Most often, malware infection occurs via malicious links or infected files downloaded from the Internet.

How can malware infect my device?

Malware can spread to your device via:

Here’s an intuitive way of explaining how malware from a phishing email can infect your PC:

Spyware is a form of malware that secretly downloads to your computer to spy on you. It records your keystrokes, clicks, usernames and passwords, credit card details, and more. Typically, you don’t know your system is infected with spyware until you notice some suspicious activity with your online accounts.

Trojans disguise themselves as legit programs and other files. Once you install them, they’ll unleash a full-scale attack on your system, creating and opening up a backdoor for other forms of malware to get in. Thus, trojans are responsible for all sorts of destruction, including data theft, deleting and encrypting files, monitoring your internet usage, and more.

Adware is unwanted software that typically hijacks your web browser. It blasts your system with popup ads, manipulates your homepage and default search engine, and can even monitor your computer activity. Adware attackers illicitly make money by feeding you ads that often contain malware like keyloggers or ransomware.

Ransomware is malware that encrypts your files or locks you out of your device. Once this has been accomplished, a ransom will be demanded in the form of cryptocurrency — this makes it hard to trace. Ransomware is common as it can be easily purchased on criminal marketplaces.

A virus is the most traditional strain of malware. Like its biological counterpart, a virus attaches itself to another program and unleashes a dangerous payload that corrupts files and can render a system’s functionality completely useless. As its name suggests, a virus spreads to another program or computer through a network only if a user opens the software that contains the virus.

Like viruses, worms are malicious pieces of code that can damage systems and spread to others via a network. In order to spread, they usually exploit a vulnerability in an infected machine or come attached to a seemingly harmless program. Unlike a virus, worms don’t require a user’s actions.

Rootkit consists of a group of malware that, once it infects a device, enables an attacker to access said device remotely. A rootkit can hide exceptionally well in your system and allows other malware to hide in plain sight by disguising it as essential files.

Keyloggers are software programs that record your keyboard strokes. This software is especially dangerous if you tend to log into your banking accounts or other sensitive material on your computer or mobile phone. Some corporations even use these tools to spy on their employees.

Also known as a cryptojacker, cybercriminals use this form of malware to mine cryptocurrency via a computer’s processing power. If it gets on your system, you’ll notice an increase in usage of your CPU and video card (they’ll get hotter and louder).

If you’re wondering what kinds of files can infect your computer, Check Point Research offers insights via their annual cybersecurity report. Online, the most common infected type of file you can download is .exe, and the common type of file transmitted via email is .doc. So, beware of these kinds of files and use a solid antivirus to detect malware before it can infect your PC. 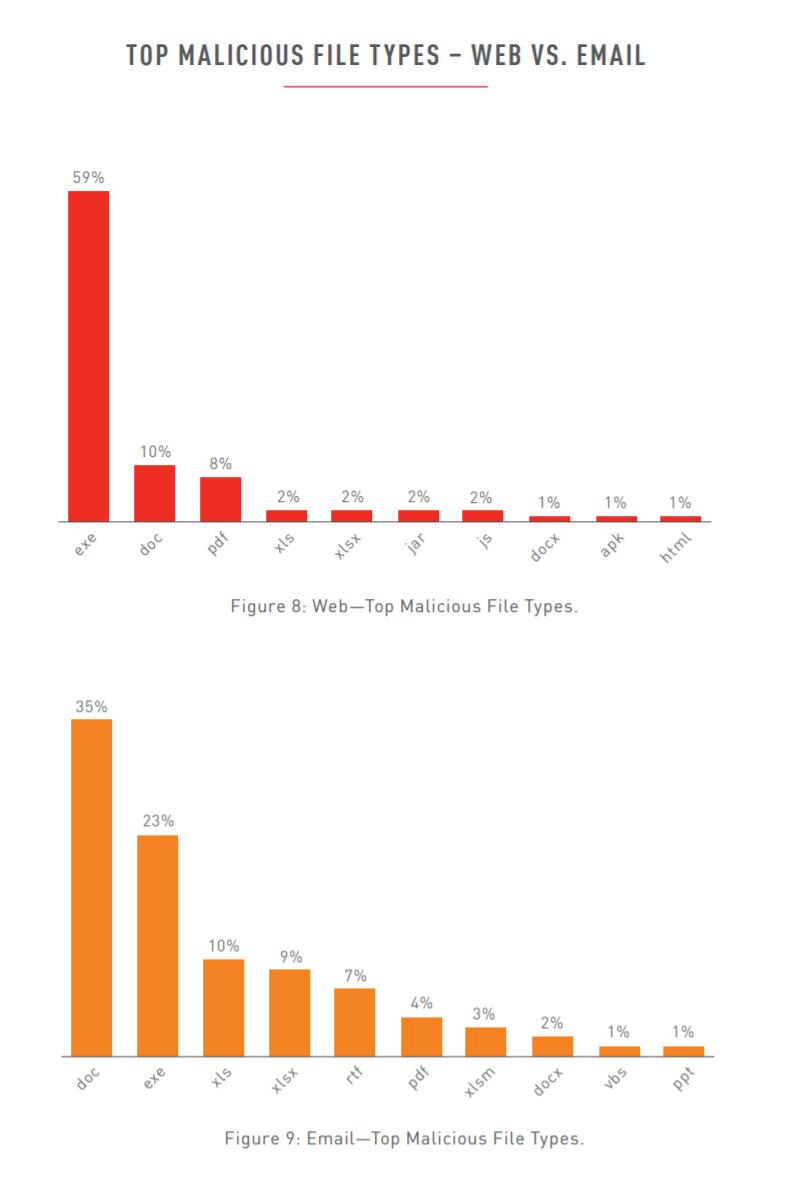 To help you understand how harmful malware is, we’ve compiled a list of malware statistics from different sources on the web. Here’s what you need to know.

Furthermore, AV-TEST detected over 1.1 billion forms of malware in 2020. This number has been on the rise for years, as seen in the chart below. 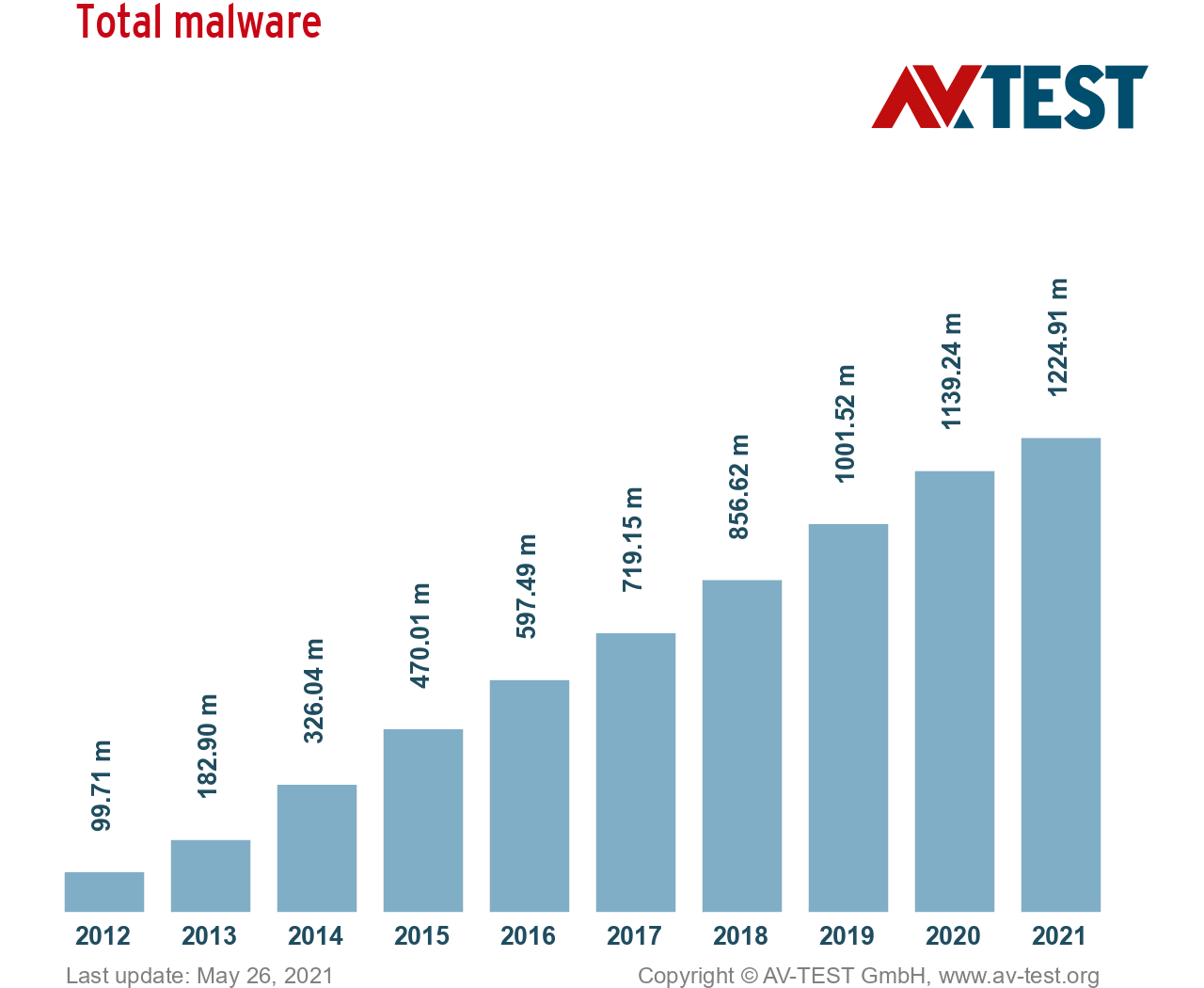 That’s not all. Every day, Google’s Safe Browsing finds thousands of new unsafe sites. This goes to show that the web is full of hidden dangers, including phishing websites. From the following report, you can see that although the number of malware sites has decreased in recent years, the number of phishing sites has increased dramatically. 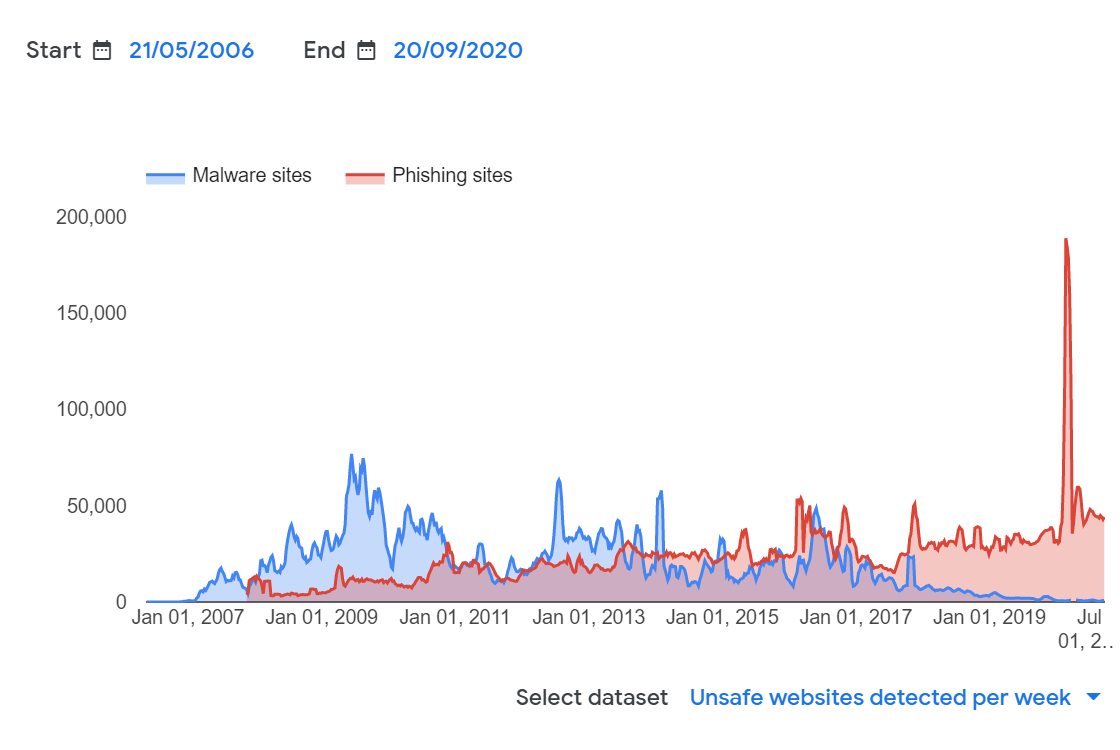 Here’s another interesting fact: according to Statista, the number of new forms of malware worldwide has increased by over 100 million from 2019 to 2020. 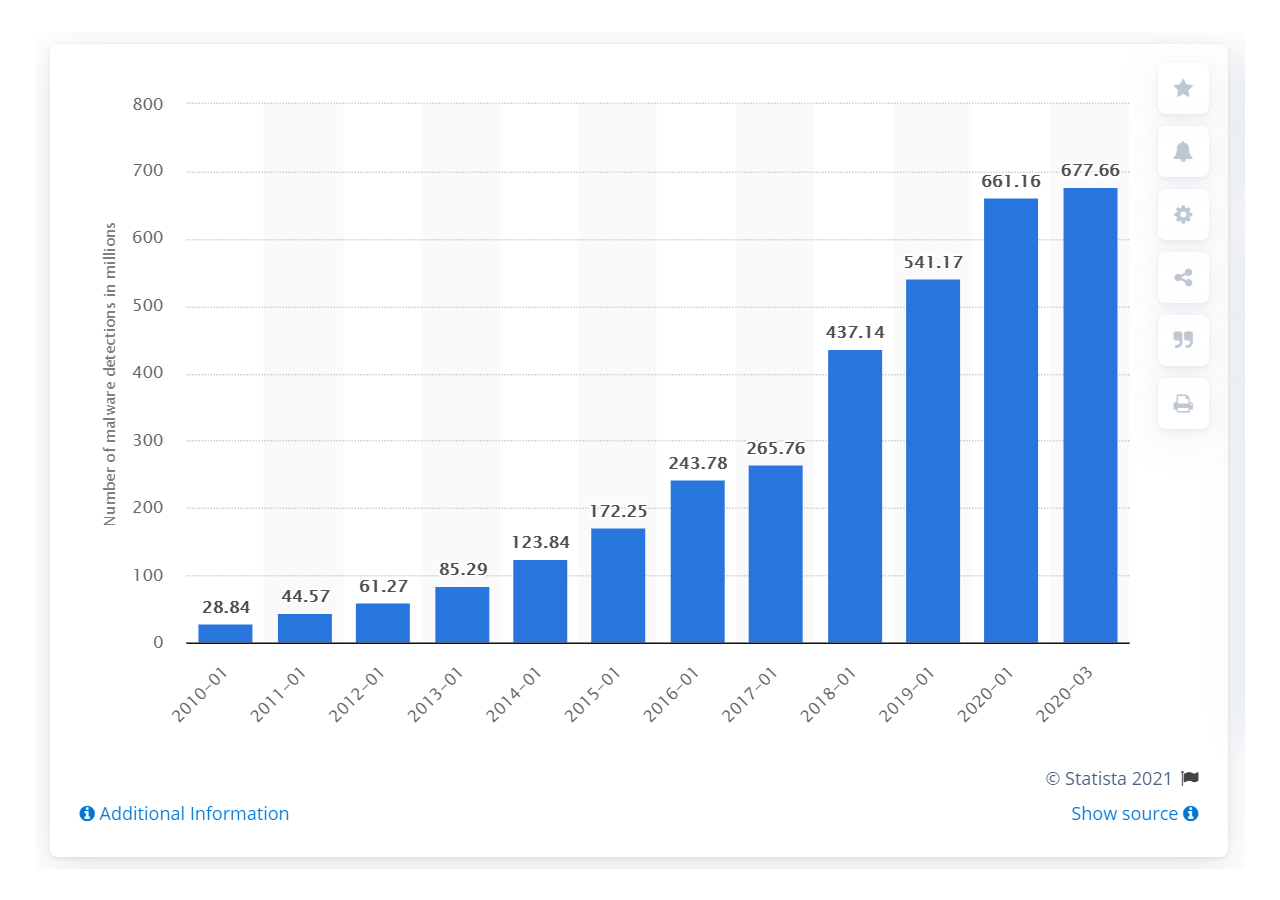 Although the number of malware detections has grown year by year, in 2020, they decreased in comparison to the previous year. Still, the number is in the billions. 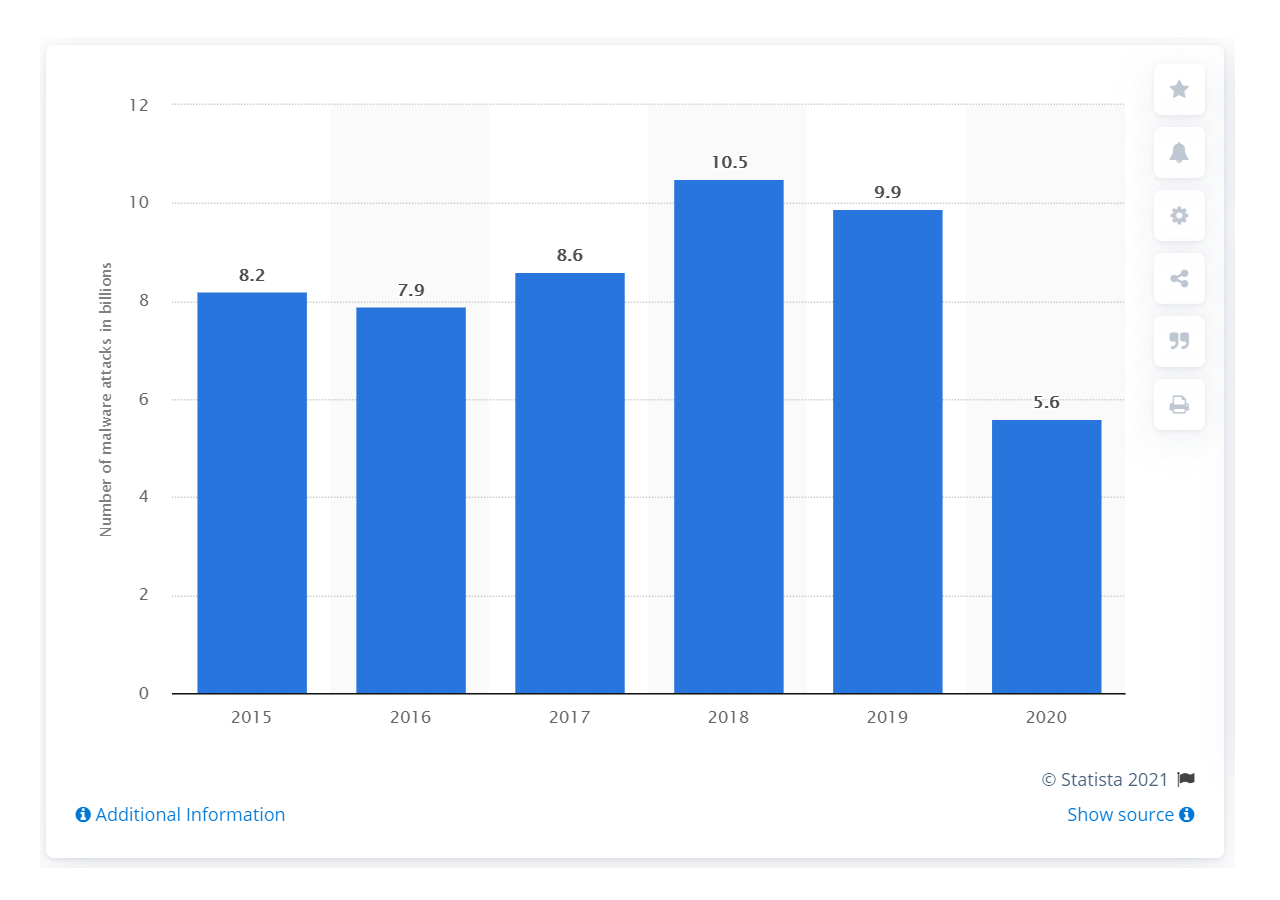 An Android device may contract malware in several ways, including by downloading fake apps from unofficial app marketplaces and even from the official Google Play store. Clicking on dubious links or malicious pop-ups is also a surefire way to infect an Android device with malware.

Here’s a concerning fact: the number of new mobile malware (most of which is Android-based) that McAfee detected in 2020 increased drastically. That goes to show that the Covid-19 pandemic was productive for mobile hackers. 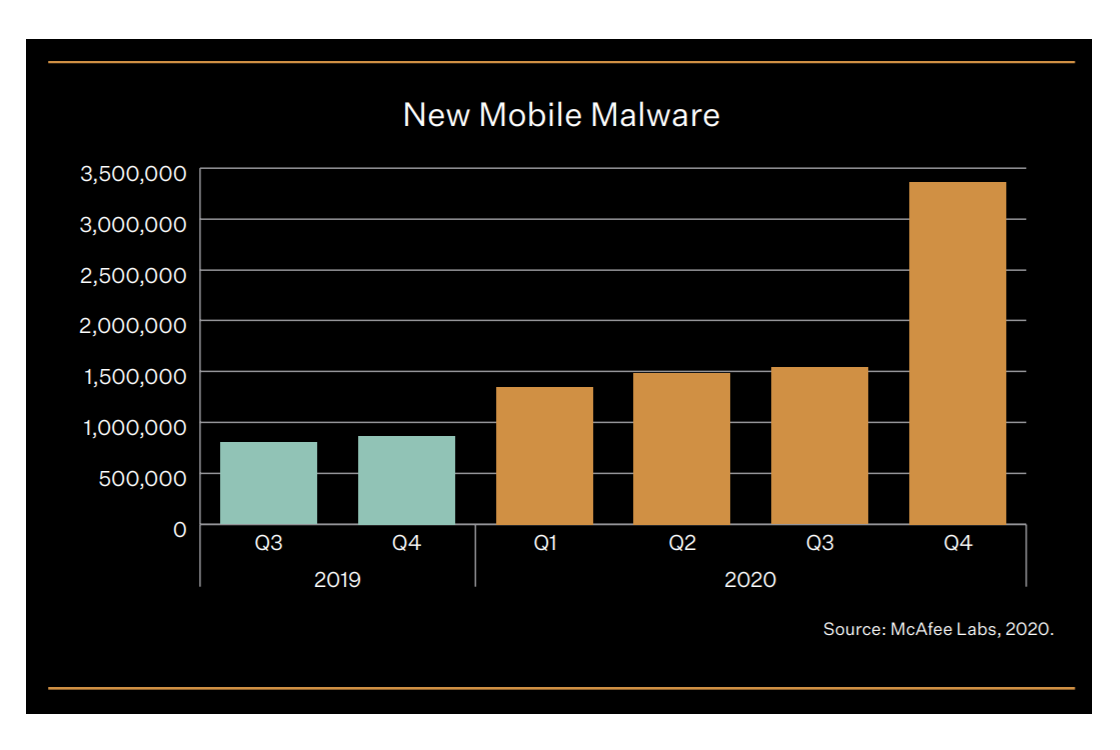 Although iPhone malware is very rare compared to Android malware, iPhones aren’t immune to malware. iPhone users can still get trojans, spyware, adware, and other forms of unwanted software if they don't exercise vigilance.

iPhone users can still get trojans, spyware, adware, and other forms of unwanted software.

Cybercriminals typically send scam messages and emails during holidays or in times of crisis. VIPs are also frequent targets of iPhone phishing attempts, with many CEOs having been successfully fooled.

Note: jailbreaking your iPhone or downloading apps from unofficial sources increases the chance that your iPhone will be infected with malware.

Although most malware detections occur on Windows, more and more Macs have become malware targets due to their increase in popularity. For this reason, even Mac users should consider a dedicated Mac malware removal program like Norton or McAfee.

Malware attacks Macs through phishing attacks or via the user visiting suspicious websites. According to Malwarebytes, adware and potentially unwanted applications (PUAs) are the most common forms of malware that affect Macs. These forms aren’t always malicious, but they can open the door to more harmful types of malware.

Moreover, according to AV-Test, MacOS malware has drastically increased in 2020 but decreased by a lot as of May 2021. 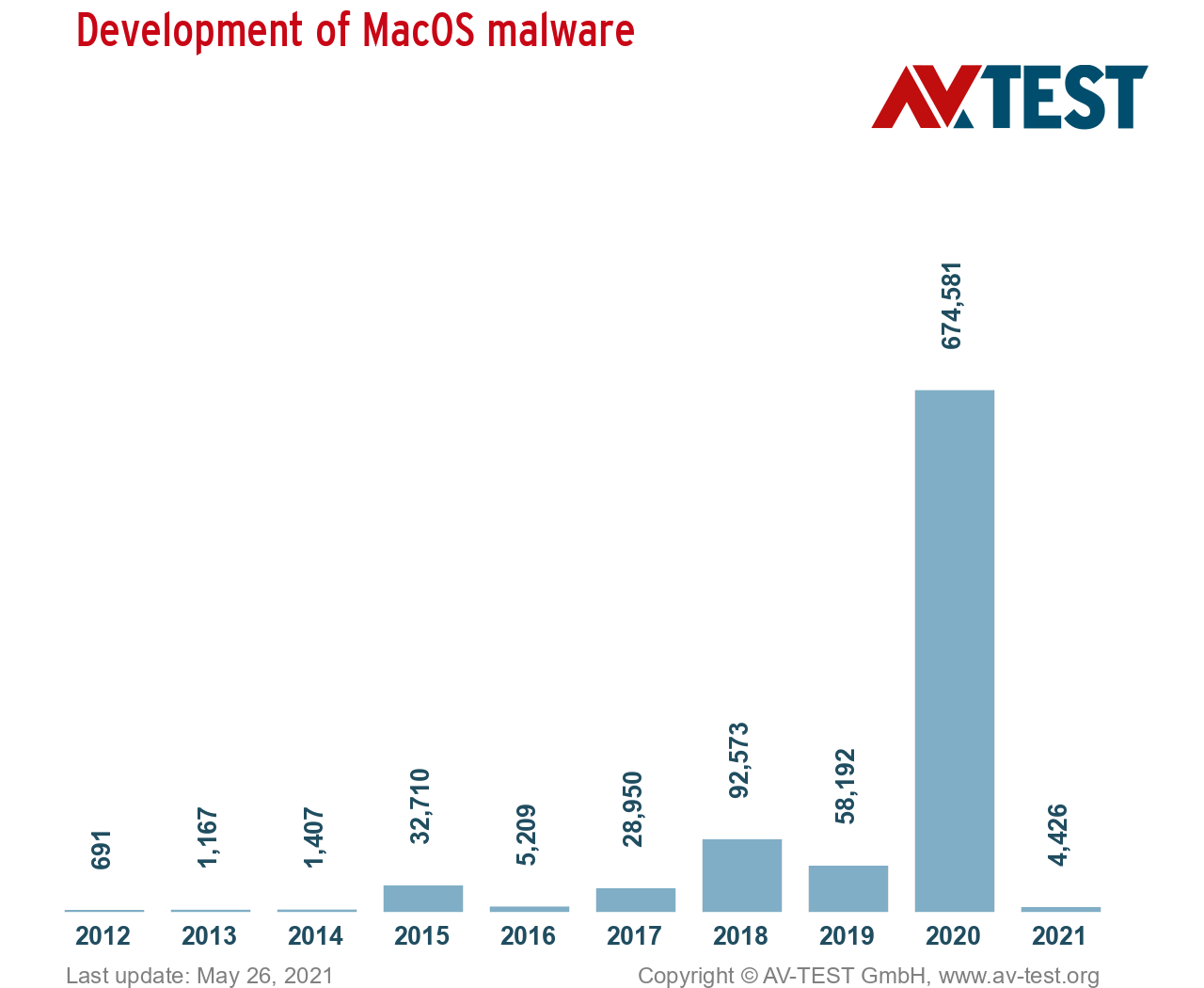 How to keep your devices safe from malware

If you remain vigilant and follow the steps below, you can protect your device from most varieties of malware:

Pay attention to a link’s domain name — unusually spelled websites may be risky.

How do you remove malware?

If you lack a legit malware removal program, get one right now! These tools feature better scanning and removal capabilities than the default antivirus tools found on Windows (Defender) or macOS (XProtect). They can also detect and eliminate most threats, which lowers the risk of losing files or having to erase your disk and reinstall your OS.

Is malware a virus?

Malware is a term that refers to multiple software threats, not just viruses. A virus is a type of malware that requires the user to open it in order for it to spread. Once it has unleashed its payload (deleting or altering data), it spreads into other programs and computers through networks.

Get a reputable antivirus program like Norton to keep viruses and other malware at bay.

How does malware work?

How malware affects a device depends on what kind of malware it is. For example, worms enter systems via a downloaded file or network connection. As a result, it can change the way a computer or network operates. A trojan looks like a legit program or file but can create backdoors for other forms of malware, steal data, or even help launch a DDoS attack.

No matter the type of malware, a strong anti-malware solution will protect your sensitive data.

What are some examples of malware?

Malware, which stands for malicious software, comes in many different forms. Malware variants include viruses, worms, trojans, rootkits, ransomware, exploits, and more. Each of these digital threats has unique capabilities, from erasing your files to hijacking your camera. Steer clear of these damaging pieces of code by installing a full-fledged antivirus program (Norton is one of them).

How do I get rid of malware?

You can get rid of malware by installing a cybersecurity software suite. Each of these advanced tools includes a malware scanner and can even detect and quarantine malware at your discretion. In addition, these cybersecurity suites will protect your device should you come across dangerous websites, files, or emails.

People create malware for various reasons — mainly for illegal purposes, such as stealing sensitive data to gain money, spying on someone, attacking a political group, sabotaging, and hacktivism. Those who create malware either use it themselves or sell it on the dark web. Having a trusted antivirus software can significantly increase your device’s defenses against malware.