What Is a Trojan Virus? Definition, Prevention & Removal Tips Trojan viruses consistently rank within the top three of the most prevalent and dangerous types of malware each year. Therefore, learning about trojans and understanding how they do damage is paramount to protecting yourself and your equipment from cyber threats.

The following article is designed to provide you with a complete overview of the Trojan virus. In the end, you’ll know how to protect your devices and get rid of trojans for good.

What is a Trojan?

A Trojan virus (named after the Greek myth) is a type of malware that poses as legit software.

Trojans are disguised as a software patch, Word doc, mp4 video, or another harmless file. But, in reality, its purpose is to harm your device or steal data through other forms of malware, such as ransomware, rootkits, backdoors, or spyware. These malicious programs often carry different payloads, so the damage they can cause differs.

Take ransomware, for example. This type of malware attacks and encrypts your data, and, just as its name suggests, the only way to get your data back is to pay a ransom to the hackers. Conversely, a spyware app might run silently in the background, stealing your usernames and passwords. The amount of damage a Trojan can cause is endless.

Even though a Trojan is often referred to as a Trojan virus, this wording is technically incorrect. A virus is a specific kind of malware that can replicate and spread to other systems or programs. Regardless, the term “virus” is still the preferred terminology when discussing malware (malicious software) in general. So, in reality, a Trojan virus means Trojan malware.

Trojans can deliver multiple types of malware, such as ransomware, rootkits, backdoors, or spyware.

Trojans were the second most detected threat against consumers in 2020.

For consumers, although the Trojan threat count in 2020 is down by 13% since 2019, the numbers are still astronomical — over 23 million. 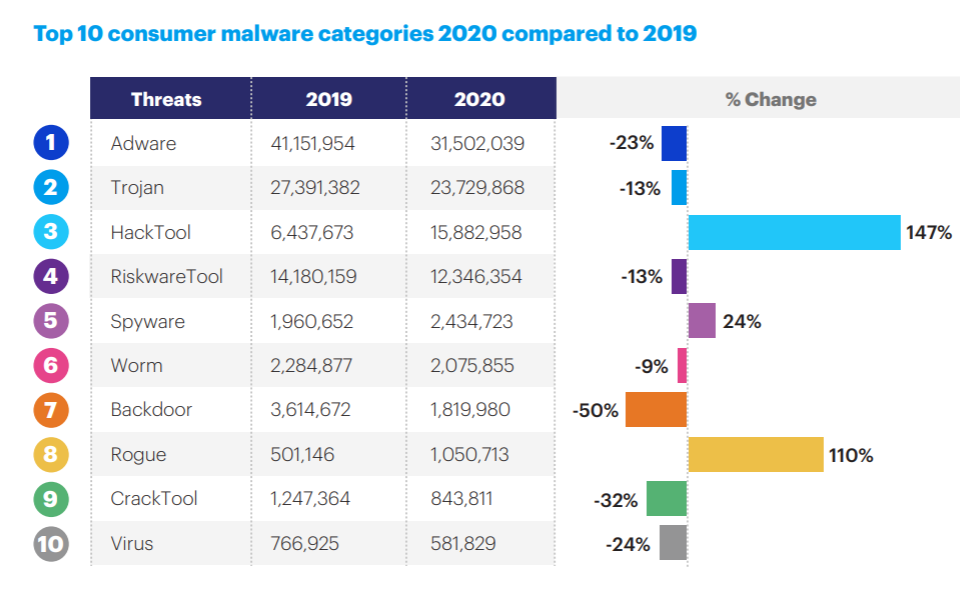 Regarding businesses, although the number of detected Trojans in 2020 decreased by a staggering 45% compared to the previous year, still, the threat count remained massive — 6.1 million to be precise! 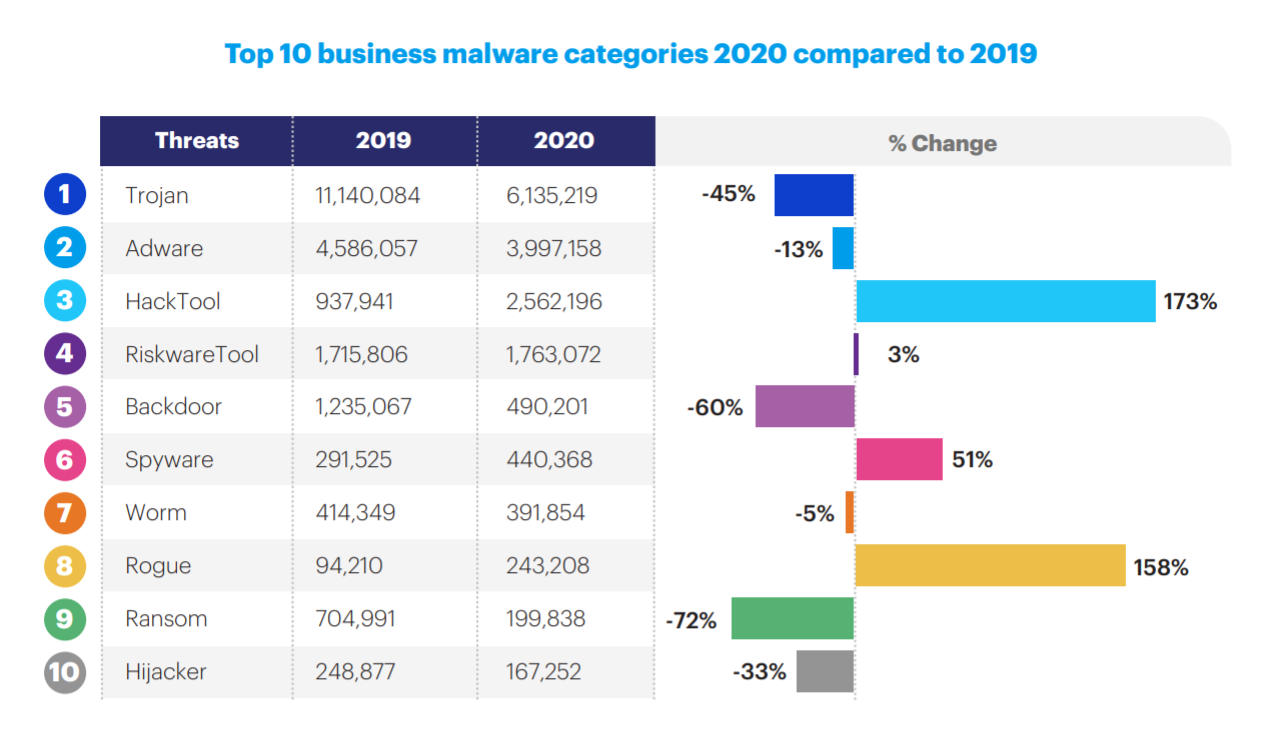 According to Cofense, the notorious Trojan, Emotet, spread malware to 290,000 email addresses in 2019 using 33,000 unique attachments. Emotet was reportedly Malwarebytes’ second most-detected threat against organizations in 2019; however, its spread decreased dramatically in 2020. 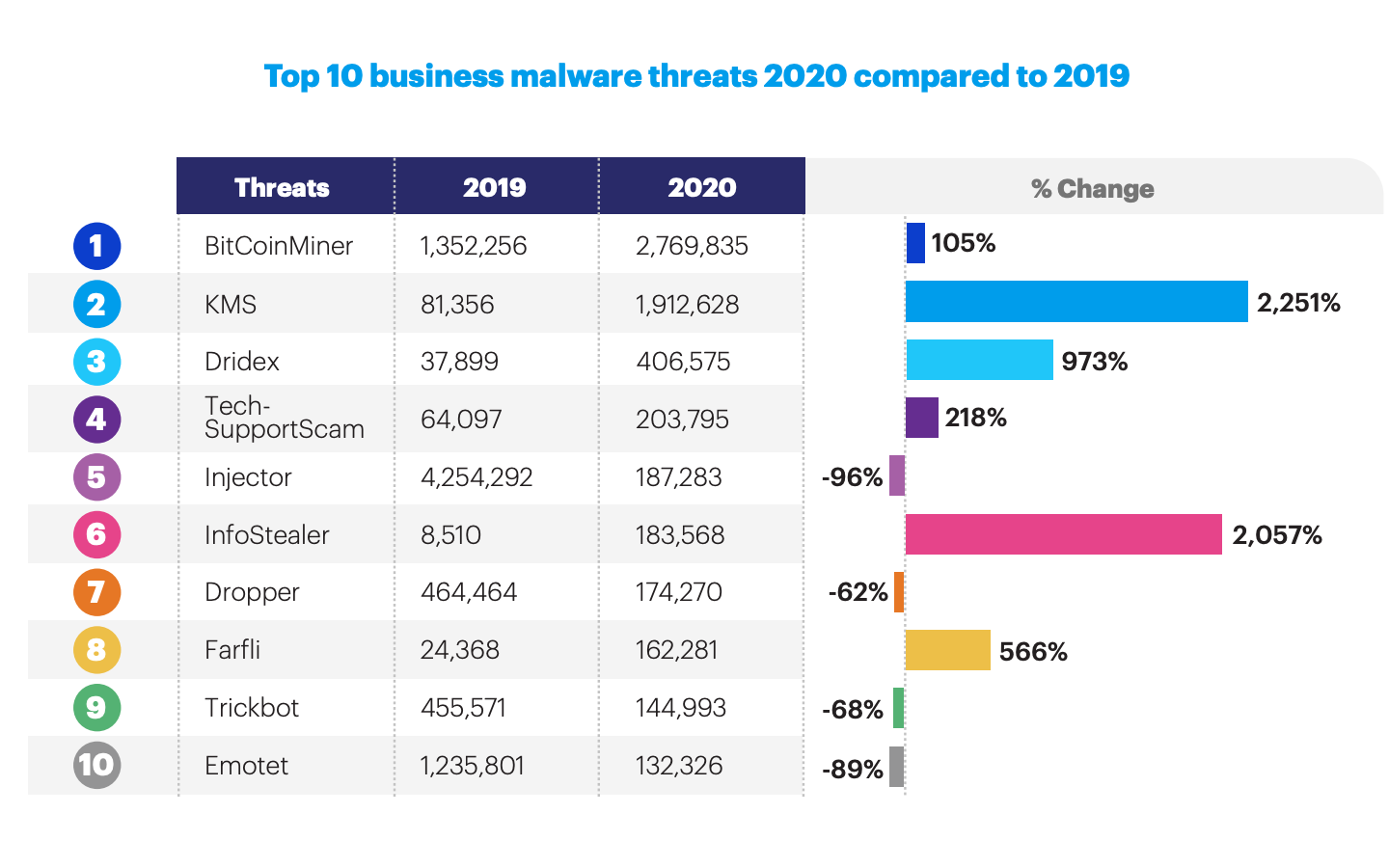 Here’s another eye-opening statistic from Statista: malware, which includes trojans, was the most concerning type of cyberthreat according to IT security decision-makers worldwide as of April 2021. 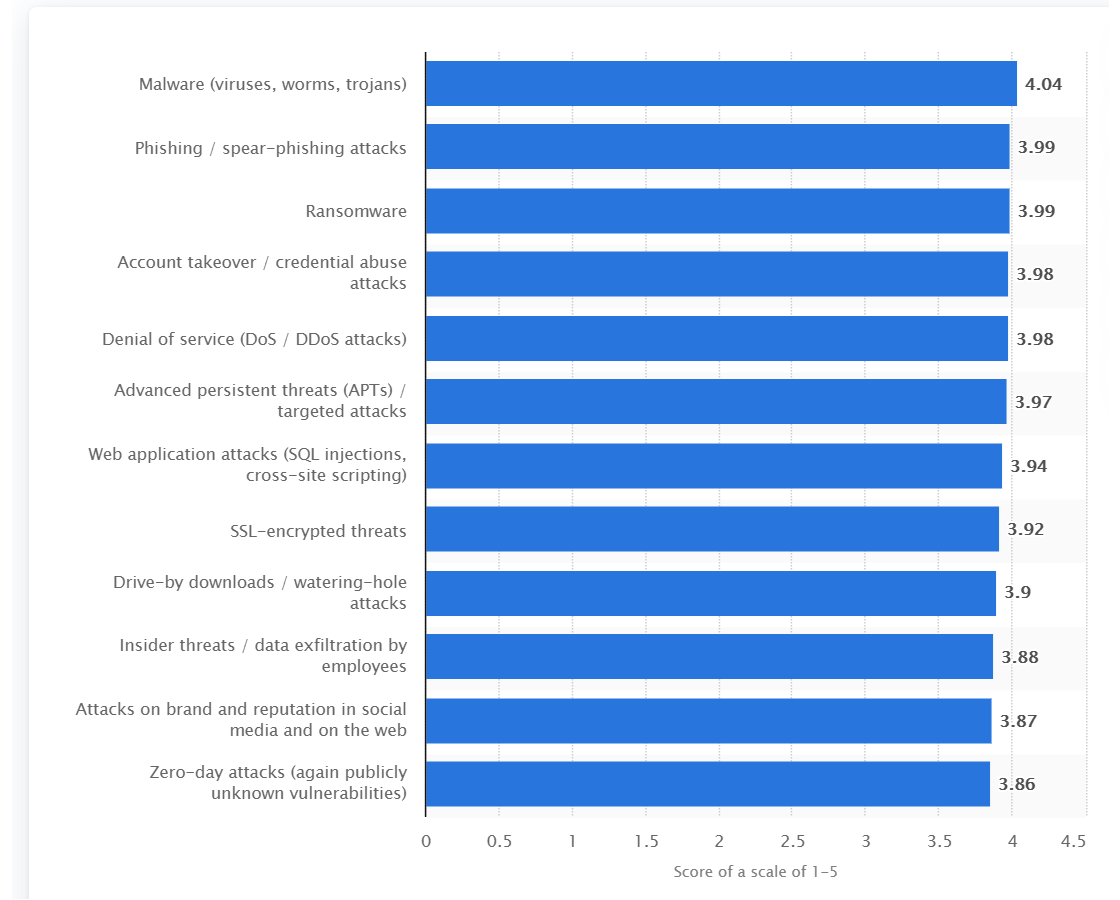 How do Trojans infect a device?

Trojans can infect your computer in several ways. Social engineering is a popular method that cybercriminals use to deliver Trojans. Here’s how it works: a hacker impersonates a well-known company and sends you an email telling you there’s a problem with your account.

Often, the hacker will include a message instructing you to click on a link to fix the issue. That link sends you to a fake website where you’re prompted to enter your personal information — or download some form of malware. Unless you have strong trojan removal software to protect you from phishing emails, there’s a good chance you’ll lose something private and confidential, like your banking credentials.

How harmful are Trojans?

Trojans come in many forms and can cause various issues. Here’s a list of the most common types of Trojans and the problems they can cause:

Google the programs you don’t recognize to make sure they’re not Trojans.

Given that billions of mobile devices are in use today, it’s no wonder that Trojans have found a way to infiltrate them, too. Both Android and iOS devices are frequent targets of Trojan attacks (although the latter has more robust protection features).

Android Trojans tend to come attached to seemingly legit apps and unleash their payloads once an app has been installed. However, these “legit” apps are often pirated, coming from unofficial app stores. Always be careful what apps you download!

Apps that contain malware can steal sensitive data from your devices, such as contacts, SMS texts, and even login credentials. Another way hackers can benefit from iPhone trojans or Android trojans is by sending premium SMS texts, which generate revenue for them.

Both Android and iOS devices are frequent targets of Trojan attacks.

Google Play sometimes detects Trojan-infected apps before it releases them to the public. However, some Trojanized apps could bypass Google Play’s filters, but Google removed the phone Trojan from the store after publication.

iPhone users can relax a little more than Android users — but not completely. Even though the App Store’s safety policies are strict, security experts discovered Trojan malware in 17 App Store applications. This is a testament to just how tricky some cyber crooks can be; it also highlights the importance of a robust iOS antivirus solution. Another way that corrupt apps can infect your iPhone is by installing unofficial software when jailbreaking your phone.

Follow these practical tips to prevent trojan viruses from infecting your computer or mobile device:

Here’s how an antivirus program protects your computer from Trojans: 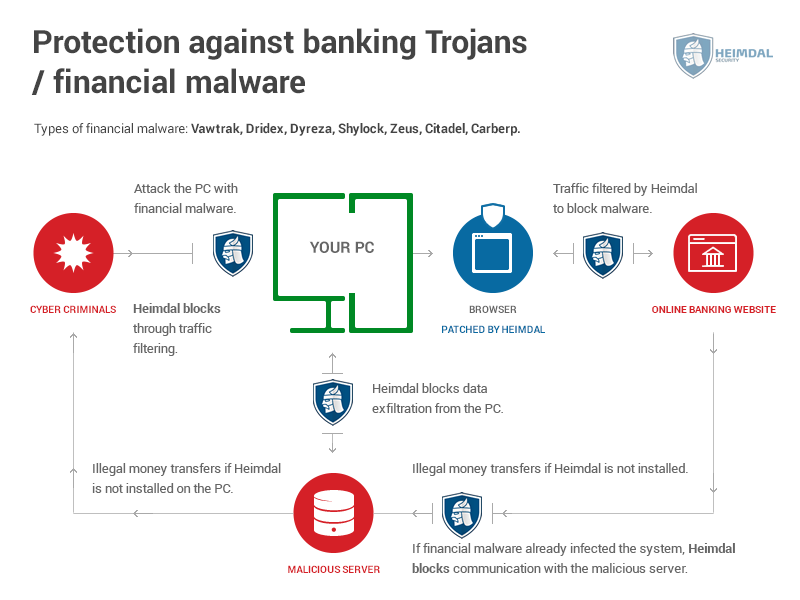 What is a Trojan virus?

A Trojan is a type of malware that disguises itself as a legitimate file like an executable or an app. Once a user has installed a corrupted file, the Trojan releases a form of malware into the target device.

Is a Trojan virus dangerous?

Trojans are some of the most dangerous forms of malware out there. They have been responsible for causing billions of dollars worth of damages since their inception in 1975.

For example, the Emotet virus poses a high risk for organizations, costing roughly $1 million per incident to remediate. If organizations and individuals don’t invest in an anti-trojan software solution, they risk Trojan infections and major losses.

Can Trojan viruses be removed?

Yes, most Trojans can be removed once a reputable antivirus software has detected it. However, if you have a backup of your data, simply restore it to remove the Trojan threat.

Where do Trojan viruses come from?

For hackers, it’s just a matter of time until someone is fooled into downloading and activating a Trojan. Enhance your internet and email security with an anti-trojan tool to avoid Trojan infections altogether. I’d recommend Bitdefender for its robust malware detection and removal capabilities.